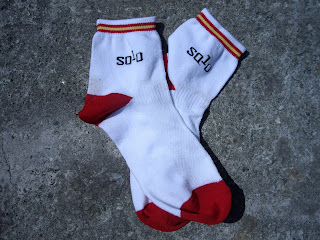 So, now the dust has settled and the legs have returned to their normal state of just a dull hum. We did okay. That’s ‘we’ as in me and Shona. All I had to do was ride. She gets to add up calories and carbs, fill my pockets, wash the bike and poke me with the sharp stick at low points. Fab.

As is now the norm we filled the Van Bleu with almost everything on Thursday morning. Leaving after work and getting down there on Thursday night is just so much more relaxing than fighting with the Friday night traffic. The M6 was fabulously quiet. Once at Eastnor picking the right place to pitch up always takes time when it’s empty and there’s so much choice. We found a flat bit in the end, got sorted and had some supper. One of the best bits about Mayhem is having 3 days off to submerge in an alternate reality. All the prep is generally done during the week before and our house looks like a complete tip. It does mean that once we’re pitched up we’re in the strange place of having nothing to do for 36 hours or so. Kind of enforced rest. Weird.

Friday just gets busier the longer it goes on. A steady stream on 4×4’s, caravans and even a couple of tiny little Daihatsu campervans flood onto the site until it’s packed to the fences. Time to wander around and catch up with people you haven’t seen for a while. Even if you have seen them it’s nice to see them off the bike and in civies. Relax. it all seemed a bit subdued this year, less trade stands and stuff to see – is everyone cutting back or did Pat just have his mind set on what’s happening next year? Somewhere along the line we fitted in a lap of the course. That was fun, relaxed pace and Shona got to find out the new 650b bike cuts the singletrack thru the trees, or something.

Saturday started in a relaxed fashion. We wandered around a bit. Found Crispin camped totally inappropriately miles away from the solo area. His gazebo was soon installed next to our dining tent and he seemed to spend the rest of the time before the start fiddling with shock pressures. As it had rained all night I stupidley had a panic half hour with mud tyres that I ended up not using, fool. We caught up with the guys from ID and checked out their new fixie frame, nice. The Gritty Kittys and Bury Leisure Lakes weren’t too far away either. Had a spot of elevenses then relaxed some more…had the rider breifing…chilled….

Wow, two o’clock already. Trotted around the half mile run course with Crisp letting the teams rip each other to shreds at the front, in another world. I’ve never done a proper run start, mebbe I should…? Still loads of solos behind us and we got on with it. The course started with a grind of a grassy climb which I sometimes walked, other times just grinded it out and once or twice rode with gusto. Well maybe it was just one time near the end, in a shot blok induced frenzy. Most of the course was completely recognisable from previous years, nothing too shocking. The stuff in the woods started damp and just got better. Polished from thousands of wheels it was lovely for most of the 24 hours. Once out of there it was time for a drink and snack on the straight before the weird marbly section on the way back to the campsite. Using tubeless tyres at low (25psi) pressures I can only imagine what that section must’ve been like for the raceheads with their pumped up semi-slicks. A bit of grassy stuff followed and then it was on to the Kenda climb. Just a boring concrete track to allow a bit of overtaking, no joy in that and I rarely rode much past the first gate. Once that was out of the way things got a little more interesting on this side of the course. Up thru the woods, bit more dirt track, that kind of thing. Nice muddy descent with a right hander followed by another, sharper right hander. The second one had a root strategically placed that 16 people who happened to be in front of me at the time messed up completely, grrr. That was followed by the obligatory off camber section which shamefully I never completed. The 2 feet above the big slippery root lay just out of my grasp.

After being spat out of the ferns onto the dirt it was all plain sailing to the start/finish. A nice loose dusty zig zag of a descent down to a short sharp climb was given an easier ‘chicken run’ after some riders came a cropper on practice laps. Maybe they didn’t realise they had entered a Montain Bike Race and failed to get enough practice at ‘riding off road down a hill’. FFS. At the rider briefing we were told the run for chickens was slower and longer. After a couple of laps everyone realised that the alternate route was actually faster and quite fun too. It had a little jump half way down and had the challenge of having to slow down enough top rejoin the course ‘proper’ at a t-junction. Then through the dips, skips and jumps where everyone got their photo taken getting 2 inches off the ground. Followed by a screamer of a grassy descent back to the start, and repeat.

After each lap pockets were emptied and refilled. Early in the evening, I think, I switched to plain water instead of energy drink. The go juice was just making me feel squiffy. I stopped for a bigger feed at 9 ish after getting it just right passing through the timing tent just before 8. After then I would have had to stop too early to put lights on. So 7 hours into the game and I swopped from the Surly 1×1 (comparatively heavy but with knobblier tyres on) to the Trek 69er ( semi slicks and sooper light ) The course was drying out nicely and I just love the 69er, just comfier and faster. No dramas with lights this year. Cateye double Shot on the bars just for added light in the twisty bits. Using a homebrew cree 4led on my helmet and a lipo 4hr battery taped to my seatpost that lasted all night. I rarely powered up above half way and it was plenty bright enough and no changing batteries faff.

Stopping for food at 9ish was an attempt to ward off sleepiness in the middle of the night and it worked. By 5am I was goosed though and had 30 minutes slumped in a chair, damn my weakness. Those above me in the rankings just kept on going. I’ve got to develop some strategies for coping when it all goes a bit squiffy.

Once that little episode was over though it was great. Sun was up, birds were singing, etc, etc. just another 8 hours to go. It had rained a bit during the night, just to keep us on out toes and parts of the course were really quite damp. By mid morning the mud in the woods was getting that plasticine quality to it. Not too bad at all really. Still eating and drinking well and the sun was shining. People out on the course were mostly quite chipper and the banter continued. Things started to get a bit frantic as they always do after midday. The top teams battering out some continuously stunning times. Can’t help but think that some of the impatient people were battling for 83rd place though.

So that was almost that for another year. Pulled out another couple of reasonable laps for the last ones and timed it quite nice to be in at 2.20ish. I felt reasonable too. So I scolded myself for not putting more effort in and spending more time pedaling instead of eating noodles.

Stats? 18 laps of a 8ish mile course in 24hrs and 20 mins. 12th soloist overall. 1st solo singlespeeder. Acceptable. See you at the next one.

ps if you dropped your empty gel packet on the course then your a git. you shame the tribe of mountain biking :o(

pps well done riders Jason, Mike, Crispin, Julie, Ros, Amy, Gav, Rob and everyone else who was smiling. The pit crews, what would we do without you? Shona and Andrew ( and Mrs Andrew and baby ).

It took us 14 days to cover the 1700 kilometres to complete the first Silk...

Quite old and quite new Surly 1 x 1 in summery bright colours (Trolls hiding...