May 27, 2013 Shona and Rich Uncategorized 0 Comment
Given the splendid weather outlook for the holiday weekend we cooked up a plan to make the most of it. Pulling a pair of  Surly 1×1’s from the back of the bike cave we hopped on the train to Kirby Stephen. Plan was to pick up the Pennine Bridleway national trail and head south till we got close to home at Summit near Todmorden. The official train start runs from Ravenstonedale but as we got off the train in Kirby Stephen there’s a good mostly off road link to join up at Pendragon Castle. From here the trail heads out onto the hills where there’s an impressive stone monument where you can lean your bike for a bit in the evening sun. 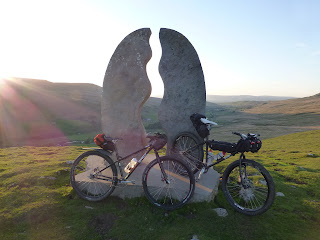 After a bit of up, down and along we started to look for somewhere to roll out our bivvy rolls. It was a great view of the full moon just off the top of the Coal Road we’d seen on an Audax a few months ago –  really quite steep especially spinning our singlespeeds. One thing that hadn’t improved was the temperature – we’d only taken daytime gloves and it was probably the highest point on the route. We’ve learnt and forgotten the ‘take a spare pair of gloves’ rule and probably won’t again! 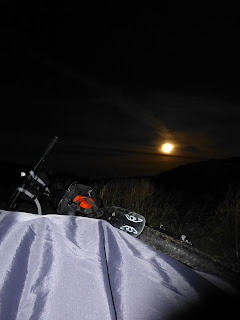 After 5 hours restless hiding in our bivvy bags we also decided we’d taken lightweight sleeping bags – another few hundred grammes of down would’ve been welcome so we got up and took our chilly hands off to the trail. 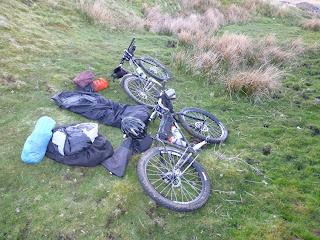 The sun peeped over the hill and warmed us an hour or so later as we got out the stove for a coffee. 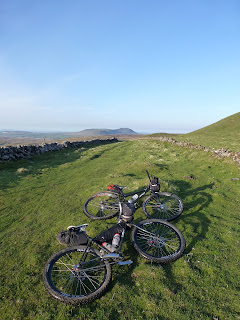 Heading for Settle we had the trails to ourselves for a few hours. 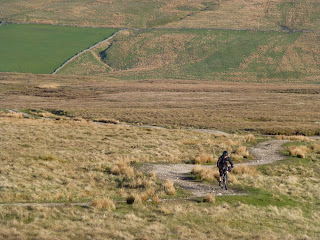 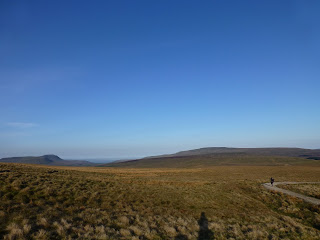 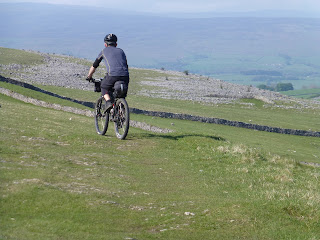 We took time out for veggie chilli and coffees in Settle before pushing, literally, on to Long Preston. Some interesting route diversions followed around farm yards and field boundaries – with gates – lots and lots of gates… 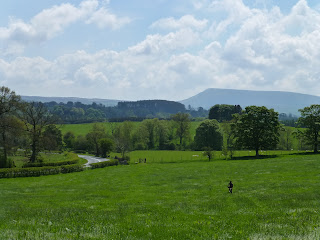 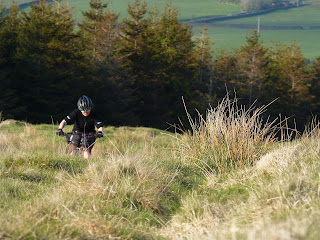 More coffee in Gisburn, no time for singletrack today though.
We’d originally conceived this trip over two days but early on we realised we were in possession of far too much time and not enough trail, anyway our hands had just warmed up. The decision was made to push on and finish up late. 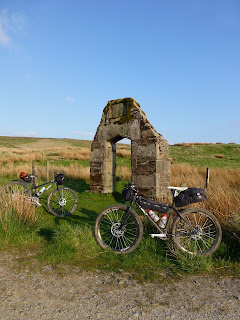 The conditions really couldn’t have been better and if we’d thought about it a bit we probably could have carried on South past the turn off for home towards the Peak District but the draw of the clean bedsheets was too much!
We’d had a fair old ride on our singlespeeds and learnt a few lessons along the way.
We’d recommend this ride to anyone who likes gates. Lots of gates.

We carried gear in a mixture of Revelate and Wildcat seatpods, bar harnesses & framebag. Nothing on our backs or in pockets – bliss.

A couple of lightweight Deuter sleeping bags were nowhere near warm enough but that wasn’t their fault. Our North Face Kilo bags would have been preferable but a pound heavier.

Morning coffee was taken care of by an MSR Pocket Rocket and a couple of Alpkit’s Ti mugs – a Jetboil would have been quicker but bulkier. We could have done without either really.

A Garmin 800 GPS lasted longer than we thought it would for navigating with some off/on for powersaving. We only got the guide book out a couple of times for route checks. The route is well signed for the most part anyway. 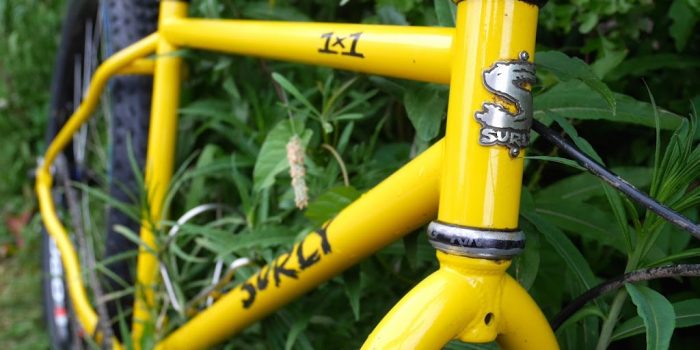