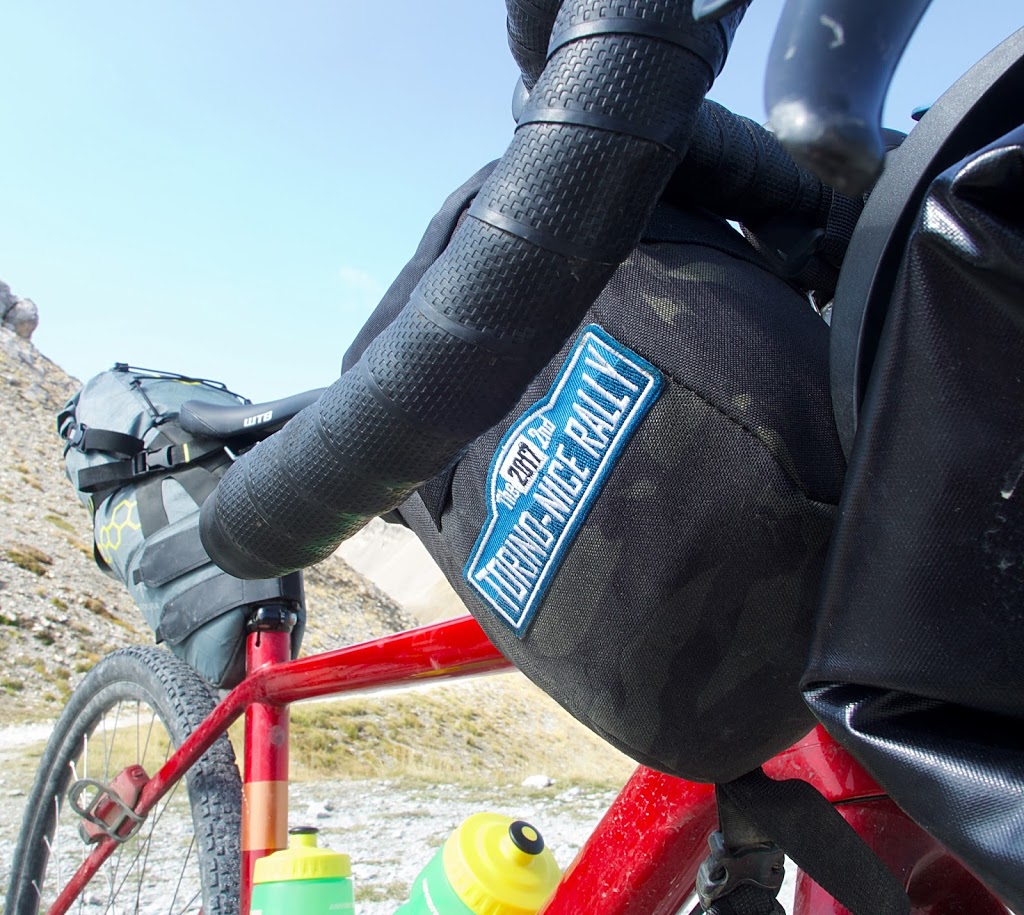 September 13, 2017 Shona and Rich bikepacking, Uncategorized 0 Comment
After seeing and hearing about last years inaugural Torino – Nice rally we decided it was definitely on our ‘to do’ list. We managed to be organised enough to book our flights to Italy and our first nights accommodation in January and then we promptly forgot about it.

Fast forward to 2 weeks before the event and suddenly we’re randomly picking our route from the cue sheets, planning a route from Milan airport to the start and throwing stuff into piles on the floor- no kit grid photos here!  As events go the TNR is a little different to most, there are no winners or losers, no fixed route to follow, just a series of GPX files that take in a series of POI’s (points of interest). It’s mostly up to you how you string them together, on road, off road, flatter, hillier, use one of the short cuts if running out of time or not.
Start in Turin finish in Nice. Simple!
We arrived into Milan the day before the official start and got into the swing of things by riding the 130kms over to Turin. A pan flat ride this gave us time to warm up and sort out any packing issues before the ‘grand depart’. That evening 120 riders gathered on the Piazza Giambattista Bodoni for a meal of pizza, pasta and beer. It was great to catch up with lots of people we knew, discuss route options and weigh up other peoples bike choices.

We arrived in Limone Piemonte early evening and picked up some supplies to keep us going that evening as we started the climb up the Colle di Tende. We’d decided to bivvy half way up to give ourselves an easier start the next morning. It was a chilly and misty night with the wind picking up which made for some hard going on the last of the climb the following morning. We were however rewarded with the famous dirt switchbacks on the way down before heading off to St Dalmas di Tende and finding possibly the best bakery in the world for breakfast.

We were now into our final day with one last big gravel climb (the largest on the rally) up to the Fort de la Forca and Col Turini. The weather was about to break again so we headed off hoping to beat the worst of it. We climbed steadily eventually breaking clear of the tree line and onto the open slopes. Ahead of us was the Fort sitting high on a hill and from here it really was downhill all the way to Nice (about 55kms to be precise).

Just as we reached the Fort the weather broke, we pulled on all our warm clothes and set off on for coldest ride we’d done for a long time. Riding the road used in the Monte Carlo rally in the torrential rain we shivered our way down to the Col di Turini stopping frequently to try and warm fingers, toes and shake uncontrollably. Another couple of hours and we’d made it to Nice, the finish point of the Cafe du Cycliste was now closed so we grabbed a hotel for the night, warmed up in a hot bath and decided to visit the Cafe the following morning to grab our finishers tyres (thanks WTB) and drink some very good coffee.

The TNR is a fantastic event, all credit to James the orgainiser for an amazing route and all the hard work he puts in (cue sheets in 3 languages, sorting the pre ride dinner and no doubt answering hundreds of questions from would be riders).
It’s also a not for profit event with all the money from sales of the rally patches and rider donations going to the The Smart Shelter Foundation a project James came across whilst riding in Nepal.

We rode 702km’s
We climbed 15,959m’s
We ate 4 Pizzas and 8 Mozerella and pomodorino paninis (each!)
plus assorted bakery goods and only 1 ice cream 🙁

Used everything- didn’t forget/ miss anything.

Well, now the puppy's out of the kennel and soon the full list of who's...